Almost all robots who compete in combat robots derive the majority of their power from Batteries. A decade ago it was popular to see Sealed Lead Acid batteries as the primary battery in many robots. Today the vast majority of Robots use Lithium Polymer or LiPo batteries. Lithium Batteries allow for a large amount of power to be stored in a relatively small volume. This article will only focus on Lithium Batteries as they are the most common.

How To Pick the Right Battery 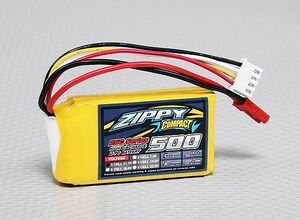 LiPo Batteries come in a variety of sizes and capacities. Finding the right battery for your robot will depend on how much power you need and how much space and weight you have.

Empty Voltage is when the battery has no more usable capacity left. This voltage is typically 3.0 volts per cell. If you continue draw power from an empty battery the voltage will rapidly drop to 0 volts. Batteries discharged below 3.0 volts per cell (will be damaged, and you may not be able to charge them again. Even if recharged, these batteries will likely have a higher internal resistance and a reduced capacity.

C rating is maximum safe discharge rate. It would let us know if the above draw of 5 amps was okay. To determine the maximum safe amp draw it is the Capacity (C) times the C rating number. So if our 3S 500 Mah battery had a C rating of 20 the maximum safe amps we could draw would be (500 Mah x 20) 10,000 Milliamps or 10 amps. Which gives us a good safety margin around a 5 amp draw. Some batteries list a fixed and burst C rate. Battery manufactures tend to over state their C rating. It is best to ensure your robots max power draw will be safely under the C rating for your battery.

When it comes to how to connect your battery to your robot there are a lot of options. It is best to chose something that can make a firm connection and can handle the amount of current you will draw. 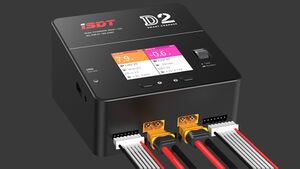 LiPo Batteries are typically made up of multiple cells. Charging is more complicated than a simple NiCad or NiMH battery. It is highly recommended that you use a balance charger to charge your battery. Balance chargers ensure that each cell is charged to the proper voltage. Without this it is possible for one cell to become over or undercharged cells. Overcharged cells release hydrogen and prone to catch fire! A balance charger greatly reduces this risk. It is very important to never charge LiPo Batteries unattended, most battery fires happen during charging, not during use!

Volts per Cell - 4.2v - Don't go higher unless you have special batteries.

Charge Current - Playing it safe, you want to charge at 1C (The Mah Rating of your battery.) You can usually cheat this up a bit to decrease charging time, but the more you do the shorter the life of your battery will be. Don't ever go above 5C.

Factors that reduce a battery’s capacity

Combat robots can be particularly hard on LiPo batteries. Typically bot builders will design their bots to have the smallest possible battery that will still last a full match. Any extra battery weight is weight that wasn't put into a weapon or defense. Draining a LiPo completely in 3 or 4 minutes is not a kind thing to do to a battery. It's best not to get too attached to any one battery. It's reasonable to expect that a competitive robot will need new LiPo batteries every year. Older batteries that are still safe can go on to live lives in less strenuous robots or even radio transmitters.

The energy density of LiPo Batteries is about 1/3 that of TNT. Each battery is by nature unstable chemistry. The batteries used in Combat Robots typically have no internal protections (due to the high draw use case) and if mishandled can explode or catch fire. It's very important to respect and understand this danger and know when a battery has reached the end of its safe useful life.

When a Battery is no longer safe

When batteries are no longer safe or are dead they need to be rendered inert (Safe-d) and disposed of. The salt water method is a very safe and low work way to render a battery inert.