(Redirected from Brett the Brick) 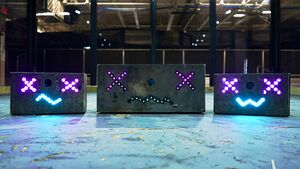 Brett has been a part of NHRL since we began in 2018, using a single 3lb cage. Bert and Fluffy made their debuts in February 2021; Bert in the new second 3lb cage, and Fluffy in the 30lb cage.

Bert is Brett's long-lost twin brother. He's occasionally referred to as "Bart," which doesn't seem to bother him.

Fluffy's origins are unknown as of now.

All three bots contain HD cameras where they can capture close-up action shots for our livestreams. They also have the important jobs of unsticking bots who have become stuck together, high-centered on debris, leaning on a wall, or doing "the thing." Each competitor gets one unstick per match from a house bot; if they get stuck a second time and cannot move, they will be counted out.

All three bots have controllable LEDs that allow the colors of their eyes and face to change.

Brett and Bert each weigh 60 pounds. They are made of steel and driven by 2 powered skateboard trucks. They each use 4 VESC Motor controllers, and are each powered by two 6s batteries in parallel.

Brett has appeared in different forms throughout NHRL history. Original versions of Brett simply used a cinder block. It turns out 3lb bots can destroy a cinder block. For the 2020 season, Brett was upgraded to a steel brick that would be easier to service and have more space for batteries. 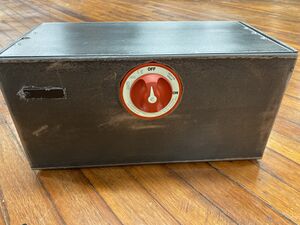 All three house bots are equipped with a large red power switch originally designed as a marine battery disconnect. Rumor has it that if any robot is able to them down during a match, they would win the NHRL tournament for the weight class they have entered. While winning the weight class is possible, it is a certainty that any robot that can switch off Brett by switching his power switch will win $1000.00 and the match they are fighting in.

Brett was successfully deactivated for the first time during the March 15th 2021 event. This occurred when Judge's Dream knocked Fragment into Brett. Since Fragment technically was the bot that switched Brett off, they were granted the win. Considering the circumstances, Fragment's driver opted to take the $1000 but forfeited their win in the name of sportsmanship.