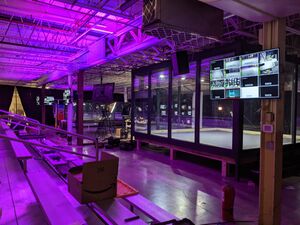 While similar to other event rules, NHRL tends to be more accepting of exotic and high powered weapons. Our goal is to provide fun, exciting fights and a fair playing field. The sprit of the rules is what is more important than fighting to get to the letter of the law. Good sportsmanship is always required.

Information regarding violation of these rules and other important information can be found on the Safety page.

Bots that use weapons such as rocket motors, or weapons that include the use of a flame, must abide by additional rules. See the sections on Fire and Flame-Based Weapons and Rocket Motors on the Safety Page.

All robots are guaranteed a minimum of 20 minutes between fights. When there are many bots in event the time between matches may be up to an hour or two between your robots last match and its next match. As the number of robots dwindles the time between your robots last match and next will get shorter. The minimum time it can be is 20 minutes. This time is per bot, not per builder. If you are entering multiple bots it is on you to manage your time. Robots that are not ready will forfeit their matches.

All fights are observed by a team of 3 judges. In the event that a fight lasts the entire 3 minutes (or 3.5 minutes for encore), the match decision goes to the judges. There is open deliberation between judges after the fight and they will announce their final decisions, declaring who they consider the winner. Judges primarily are looking for aggression and control of the match.

Matches will be judged across 3 categories of equal weight;

Modular bots are robots that can change offensive or defensive features depending on who they up against in the tournament. Repairs and replacing broken components of your robot don't count as a modular robot. If you are changing less than 10% of your robot weight and none of it is powered, it’s not considered a modular robot! Like all other bots you still need to bring it to the green room in its final ready state.

Bringing Spare Batteries is HIGHLY encouraged. Bots get a minimum of 20 minutes in between matches for repair and recharge. Rarely is this enough time to recharge a fully dead battery. Bringing spare batteries is highly recommended! If you let the organizers know your battery size and connector type one week in advance (robot@nhrl.io), we will gladly provide you with a spare battery for your bot for free. NHRL has a strong preference for XT style connectors XT90/60/30s.

Spirit of the Rules

More important than winning or any prize is that the events are fun and enjoyable for all. Short of the weight rule, the rules exist to set the sprit more than a specific worded law. AKA Don't be a lawyer about it. We have a bias to fight robots that show up. If you build something new that you think plays to the edge of rules, show up and tell us why it should be allowed. Odds are we will let you fight, we love new creative ideas.

If you want to speak to an official about potential new bot designs that you feel may be on the edge of the rules, you can contact staff by emailing robot@nhrl.io.