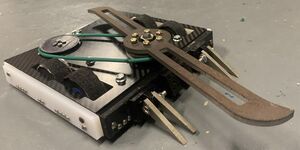 PGF as seen at NHRL September 2021 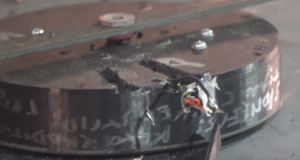 On the twentieth of November 2020, not a soul was stirring in the house of PGF. Until their maker ran a second weapon test and promptly shorted out his entire system. No longer did he have any chance to get new parts before the event, and would have to head in blind. He had the empty shell of an awkwardly tall Roomba disaster in his car, as well as a great viper kit legend known as Buddybot that actually worked. The builder got there and was saved by the event organizer. Said organizer most likely regretted wasting 30 minutes of his time. As PGF had drawn an actual good bot, in the overhead saw Chopsicle. With it's trusty minibot by it's side it went into battle. It started before the other robot because the stream had started countdown before everybody was ready. The match was then reset, and Chopsicle caught the Roomba and impressively made pretty quick work of the 5mm thick nylon top. They had to release PGF though, and now came it's chance. It had once shot to rip the uprights clean off of Chopsicle. The minibot layed down the diversion as it spun up. And then it ran straight into the minibot. PGF most likely got tangled or immobilized on Chopsicle, who dilevered the kill shot to the already borrowed electronics. Then PGF was dead so they had to forfeit to Drum Go Dum. 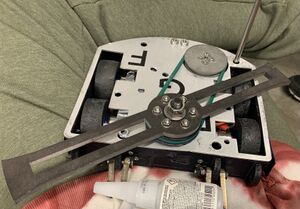 The much improved PGF 2

After the great disaster of February, the robot was "ready" to compete for real this time. it then promptly drew one of the best robots on the east coast named Scrappy for the first fight. It lost, it was bad, the weapon came out.

After being demoted to the losers bracket, and repairing the robot to make sure it could function. The builders faced a bot from team WPI named Taurine. It was a Undercutter with thick 3D printed armor. Needless to say, it was a tough match up for the Roomba's son. The fight was pretty good early on for PGF, as they did some damge to the left side armor of Taurine. And also threw their mobility out of balance by chopping off part of a wheel. However taurine could still move pretty good and tore off PGF's sketchily mounted wedgelets. After a few more exchanges between the two, The pulley sitting atop the weapon motor on PGF shattered, rendering the weapon system useless. The dumb driver kept the weapon on. Which probably burned way more current than the battery could supply. So after getting a side of armor (which was damaged from Scrappy) completely torn off by Taurine, PGF decided to take a nap. at the end of the day all the electronics still worked and the robot was fully functional with a new battery and a pulley. The driver considered this a win, the writer agrees. 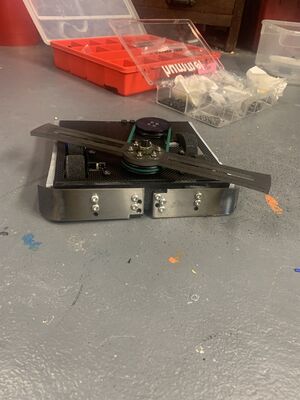 PGF 3.0 Takes on Luma's Weed Wacker 3 in it's first fight at NHRL May

The writer is proud to report that PGF has won a FIGHT!!!!!!!!!!!. After going full deep dish style and becoming a sqaure bot, PGF III, Possibly Going to Fail was able to be actually competitive!!!. Despite it's builder making a dumb mistake in it's first and third fights all is well in PGFville. The Improvements In durability provided by the new UHMW armor was felt against Luma's Weed Whacker. Despite it's weapon not working due to belt tension issues, PGF was able to actually tank some hits with it's titanium wedge, SHOCKING!!!!. Even though it was moments away from draining the Weed Whacker's battery completely, a side of drive was lost. And unfortunately PGF extended it's losing streak to 5.

Next was the crippled wedge bot shake. It couldn't move very well, PGF was able to move it's weapon. The drive was a little funky though. Despite This, PGF was able to shift walk over to Shake and rip into it. And the weapon did some actual damage against the unfortunate Shake. Shake no longer could move after a gearbox had stripped and was stuck in the corner. PGF did a little more damage at the very end. And then Shake tapped out which sent the builders (and Lumakid of Luma's Weed Whacker 3) into a frenzy.

Of course the driver put in a defective battery against Uch Funt. And set the record for tap out time. So it goes.

A picture taken moments before disaster

PGF Returned after a 4 month break to reclaim its throne as the dumbshit king of NHRL at the September 2021 meet. And it certainly did reclaim that crown. Despite making major improvements to the drive system and weapon height, said weapon would never work throughout the event. And was also not properly reinforced in its first fight. PGF faced the grim reaper in Underbit3 as its first fight. It got torn apart spectacularly in less 30 seconds. The whole weapon assembly was torn straight off. Reminiscent of the SCRAPPY fight from an event long past. PGF then went to the losers bracket and faced a less experience team in Carrotz. PGF may have had a chance in this fight had it gotten its weapon working. But alas it did not. Despite the loss of weapon it soldiered on, craftily causing carrotz to murder its own mini bot after launching it several times. However PGF lost its poorly mounted forks within seconds of the fight starting. Because of this it had no way of pushing Carrotz. Carrotz nearly lost the fight in the dying seconds when it stranded itself on its deceased minibot. But it was saved by the bell. Eliminating PGF from another unsuccessful appearance at Norwalk Havoc.

PGF did however have a more successful appearance at MakerspaceCT’s Maker Battle. Going 2-2 and somewhat validating the latest changed to the bot 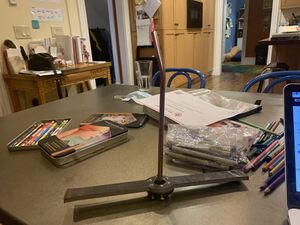 As mentioned above, the first PGF (Probably Going To Fail) was bad. So the builder redesigned it because he hated it. It was now known as Potentially Going To Fail, was smaller, allowed for forks on the front, and has actual spots for armor. It is set to compete and the first NHRL meet of 2021. The builder says if it goes two fights this time it's a win. The writer agrees.

After two months of building and failed prototypes the second PGF was primed to fight the next day on Feb 5th. It then had a tragic incident. In part to dumb errors and also a tragic sabotage effort by Captain Kirk, PGF 2 lost both of it's motors, the captain was not happy. He may or may not have had several coping ice cream drum sticks the next day. The robot is now set to compete in the march meet, and if it doesn't, watch out First Officer Spock. Those are the drivers words not mine dear reader.

The robot has Evolved and is now competent. It is now a sqaure with a sexy titanium wedge up front. With a carbon fiber top and newly improved armor, it can only go up from here from the team after their first win in the May tournament.

It did not go up

PGF will return in November. As it hoped to follow up on some more recent successes. See you then…