THIS PAGE IS A DRAFT 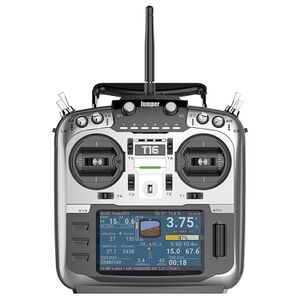 Radios are often overlooked but possibly the single most important part of any combat robot. They also have the advantage of being part of the robot that is not at risk in the ring. If there was one area to invest and spend time learning, radios would be it. There are RC radios from a wide array of manufacturers on the market. We will cover a few of the popular ones but this guide should not be seen as listing the only radios out there.

Radios have improved dramatically in the past 10 years

With the explosion of hobby and racing drones RC Radio technology has advanced at a staggering rate. Many of the guides/rules for combat robots on the internet are quite old (I am looking at you NERC!) Radios purchased today are crystal less and typically use digital spread spectrum technology in the 2.4Ghz band. These radios have design considerations to deal with crowded spectrum and they tend not to care that lots of other radios,wifi,bluetooth mice, etc might be on the same spectrum. Most radios ranges are measured in kilometers and typical latency is around 22ms. Radios work by binding the receiver to a unique encryption code. This ensures there is never a conflict with another transmitter and receiver.

How to Pick a Radio

Competitors should look at radios as an investment in both a transmitter and an ecosystem. One transmitter can be used with many bots and if taken care of will last many years. Your transmitter is the sole way you communicate with and operate your bot once its in the ring. Good transmitters with tight programming can make a huge difference in how drivable your robot is. Most robot fights are won more based on the quality and control of the driving than the quality of the weapon. Knowing your radio inside and out can give you an edge.

Radios come in 2 major form factors and 2 stick configurations. Radios built for RC Car racing tend to have the trigger style format. Some competitors use these for Combat Robotics but they are not the most popular. They tend to be less flexible as far as reassigning channels and in general are a poor match for the type of control necessary in Robot Combat. Stick radios tend to come in either a Mode 1 or Mode 2 format. This mode refers to wether the right or left stick is the "throttle" stick. Typically the throttle stick does not have a centering spring on the gimbal so it will stay in the position you leave it. Almost all stick radios can be switched between Mode 1 and Mode 2 with disassembly.

NHRL Recommends a Mode 2 stick radio. This will allow you to have channels controls to control almost any kind of robot.

A channel represents a controllable value from the transmitter to the receiver. Typically between -100 to +100% (1000 - 2000uS). All robots will need a bare minimum of 2 channels to allow for you translational motion. Think forward/backward as one channel and left/right as another. Each weapon or other controllable part of the robot will need another channel. If you are looking at the radio as an investment you should get as many channels as you can afford. NHRL recommends no less than 4. We have yet to see a bot that uses more than 8 channels.

While all this is subjective, NHRL has strong feelings. Getting a radio with a screen, mixing support, and more channels than you think you need can be really helpful. Also a radio that is powered by rechargable batteries with a good battery meter also helps.

At current there are no radio companies making RC radios specifically for combat robotics. Most of the radios used in combat robots are made either for RC Model Airplanes or RC Cars.

These radios are part of a closed proprietary ecosystem. Firmware updates and accessories and receivers only come from the vendor. More expensive radios in this category tend to come with excellent documentation for advanced features.

There are several open source radio firmware projects. Radios compatible with these projects tend to support a crazy huge number of features but often times documentation can be hard to come by. Feature updates are frequent.