Wormhole is a new bot at NHRL built from scratch by 16 year old Stephen Boggess. It's first competition was in July 2021, where it unfortunately went 0-2 with 1 time knocked out, and one loss to a judges decision. 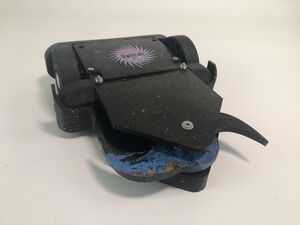 Comments about July 2021: In this competition, and especially coming up to it, I gained a bunch of information on my bot, and how to improve it. The reason my drive was messed up the entire competition was a matter of not enough ground clearance.

Comments about the Bully fight - July 2021: Both fights the weapon came off, but in the Bully fight, the weapon rattled the screws loose, in turn causing the weapon to fall off. Despite what Kyle and Luke thought, it was NOT caused as much by the impact as it was caused by my own error. I forgot to Loctite the screws holding the hub, pulley, and weapon all together and on the shaft, and I very quickly learned my lesson as I failed to control the fight from there. The hole on the top was there because I wanted to get a vertical system functional, but just didn't have the time to. As it was, I barely had the horizontal functional. When my weapon came off, the weight was set back onto the wheels more and so my drive was fully functional from there, however it took a bit for me to get used to as I had to crab walk the entire day. If you listen closely, you can hear that even when the weapon was gone, the motor was still spinning. Whoops...

Comments about September 2021: While I only had 3 official fights, and 1 grudge match against Captain Generic, my weapon assembly came off 2 of those fights, and in the grudge match, I suspect I cut my own belt during a hit. All and all, however, Wormhole took minimal irreversible damage, despite what it looked like.

Comments about the Red Hawk fight: Well... it is not difficult to explain how this fight went... Red Hawk destroyed the piece that was meant to protect the belt/pulley, and tore out the weapon assembly. As well as that, both motor axles got snapped off, and the wheels came with. At that point, I was completely immobilized.

Comments about the Bad Posture fight: My first career win(not including FFs), I found it to be a lot of fun finally being able to do some severe damage, as I have been in the opposite position several times. After that fight, I found it quite easy to just go back to the pits, replace the battery, and get back to the green room for another fight against LuxRay Mega X.

Comments about the Luxray Mega X fight: Well, back to losing horribly again... The entire weapon assembly came off again, only this time, it didn't stop there. One wheel came off, causing me to have to crab walk around, but as there was nothing to lose, I wasn't going to stop moving or tap out. In doing so, my front was torn to bits, and my top plate was bent out of place. However, after getting back home and completely disassembling it, I found a piece of TPU filament, light blue, 1/4" wide, exactly as wide as my blade. It was mixed in the wires, but as I didn't take apart the entire robot until I was home, I didn't know about it... So LuxRay Mega X, if you see this, check your front... I think there might be a little bit missing from that fight.

Grudge match comments: Captain Generic, Beater Bar, surprisingly did not do as much damage to me as I thought I would take. Brett, once again, not as much damage as I was expecting, however a couple of wire connections were knocked loose which caused the loss of drive.