Nitro Hornet is a 3lb beetleweight robot built by Team Ignition. Its weapon is a drum spinner. Its first NHRL event was the very first one put on, and it continues to be an active competitor.

Norwalk Havoc 2018 was the debut of this version of Nitro Hornet after it was destroyed in its previous competition. Notable upgrades include titanium skids and more sturdily-mounted side armor.

Nitro Hornet continued through 2020, earning a third place finish at the March event, until that iteration was retired after a clash with Project Liftoff at the May event. The next version introduced the aluminum frame and much sturdier side armor, but a mistake made when tapping the weapon shaft left it inoperable when it shattered early in its fight with Squishy. With no spare weapon shaft, it had to forfeit its losers bracket fight. 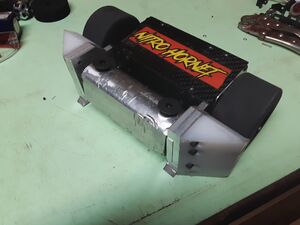 Nitro Hornet as it appeared for the October 2019 Norwalk Havoc 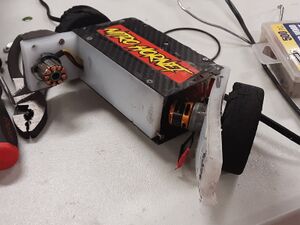 In 2020, Nitro Hornet was once again re-designed dramatically, taking weight away from the front to make it much sleeker. It showed promise in its first appearance at the first round of the July doubleheader, but was unable to qualify for the finals.

Outside of Norwalk Havoc

Nitro Hornet debuted in late 2017 as a much wider drum design. It impressed in its first showing, winning the "Coolest Robot" award at its first event, SWORD 2017. This wide design lasted until July 2018, when it was badly damaged in its final match. It has had solid showings at both Motorama 2018 and 2019, making it deep into both brackets.