Shreking Ball is an 8" ball that was built as an engineering challenge. When powered on, it glows green. 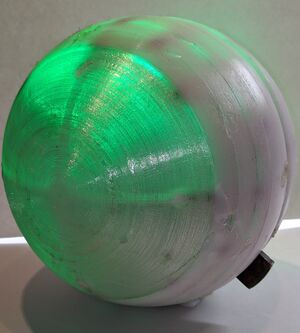 Shreking Ball, to my knowledge, is the first (and possibly last) of its kind. It bears some resemblance to TUZI (a Chinese competitor robot which fought in Season 2 of King of Bots). Shreking Ball's two sides are locked together form a solid shell that spins as one unit (TUZI's two sides were really wheels shaped as half-spheres).

Shreking Ball rolls around the arena like a "mad hamster stuck in a ball". It has an internal reaction wheel which can be used to rotate the bot, but the weight of the reaction wheel was undersized and turned the bot too slowly for competition.

The first appearance was at the November 2020 NHRL event. It features a (mostly) vertical spinner weapon, embedded inside the ball that protrudes 0.75" outside the ball. The main body is varying thicknesses of HDPE, cut with CNC. The two ends that cap the sphere are TPU. The internal weapon pulleys and drive gearing are 3D printed nylon.

There are several big issues with this design approach: 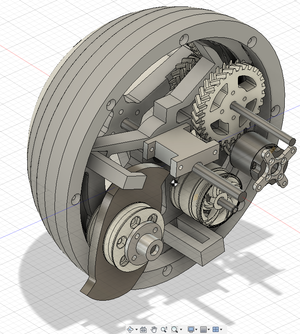 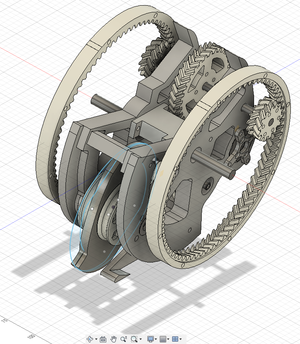 In its first fight in 2020, Shreking Ball went up against Droopy, which is also a 5 lbs bot with two very heavy and destructive horizontal spinners. The match was fun to watch... both bots went aggressively after each other and when Droopy made contact, Shreking Ball went flying. Needless to say, given Shreking Ball's lack of a controllable weapon, it did minimal damage to Droopy, while putting a few hundred cuts in the arena floor. Droopy landed some massive hits, which resulted in cracking one of Shreking Ball's rings (and adding 24 gashes around the rest of the bot). Shreking Ball made it to the end of the match, and Droopy was awarded the judges decision.

In its second match, Shreking Ball was up against Booooring. Given that both of these bots have minimal/ineffective weaponry, it was mesmerizing to watch the green glowing ball, but the match lacked the big hits of the first match. Given the length of repairs from the first match, Shreking Ball's battery was not completely charged and it ran out of power in the last 20 seconds of the match.