Silent Spring is a beetleweight featuring a modular design. This robot built by Jamison Go has been competing at Norwalk Havoc since its inaugural event.

Silent Spring went undefeated from its appearance at the debut December 2018 NHRL event to the January 2020 event. It did not lose a fight for the entirety of 2019. That 17-fight winning streak is the longest in NHRL history, finally snapped in a loss to Narsil. Silent Spring got its revenge that event, coming back from the loser's bracket to defeat Narsil in the final twice and win the January 2020 tournament; one of its many Golden Dumpster victories.

Jamison Go also competes on BattleBots with his 250lb heavyweight SawBlaze. He also has run a number of robot at NHRL, with an experimental version of Silent Spring called Silent X, two hobbyweights called Attrition and Saiko!, and the reigning 30lb champion MegatRON. 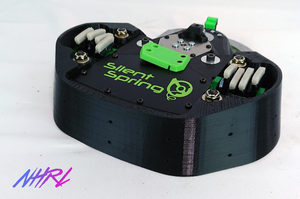